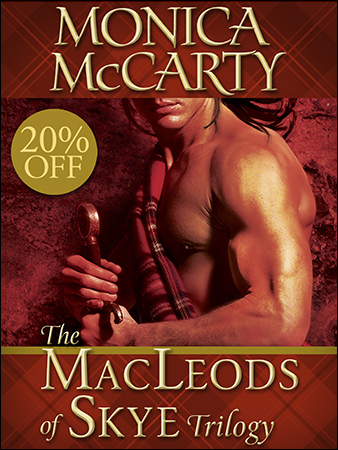 The MacLeods are Back!

Praised by Julia London as “breathless” and “enthralling,” Monica McCarty’s novels featuring the MacLeods of Skye have won the hearts and minds of romance readers with riveting historical adventure, delightfully independent heroines, and the steamiest Scottish warriors this side of the Highlands. Now McCarty’s unforgettable trilogy is available in a single eBook bundle:

HIGHLANDER UNTAMED
Rory MacLeod is a powerful Highland Chief with only one allegiance—to his clan. He vows revenge against the rival MacDonald clan, though duty demands a handfast marriage to Isabel MacDonald—a bride he has no intention of keeping. Blessed with incomparable beauty, Isabel is prepared to use every means possible—including seduction—to uncover her husband’s most guarded secrets. Instead Rory awakens Isabel’s deepest desires and her sweetest fantasies. Now Isabel has found the happiness she’s always dreamed of . . . with the very man she must betray.

HIGHLANDER UNMASKED
A hardened mercenary on a secret mission to protect his clan, Alex MacLeod must keep his true purpose hidden. But his dangerous endeavor is threatened by a beautiful woman he saves from outlaws, never dreaming she will appear at court and put his plans in jeopardy. As Meg Mackinnon challenges Alex—the midnight rescuer whose smoldering blue eyes and raw sensuality left her breathless—to reveal his secrets, the stakes grow perilously high, especially for the bold woman who dares to unmask a highlander.

HIGHLANDER UNCHAINED
A born leader possessing brute strength, Lachlan Maclean will do whatever it takes to protect his clan—even if it means abducting the most willful woman in the Highlands. But Lachlan is unprepared for the beautiful spitfire who digs beneath his chiseled exterior. Flora MacLeod is determined to avoid her mother’s fate of being bartered away as a marriage prize. Vowing to make her captor pay, she boldly engages him in a battle of wills, sweetening the challenge with dangerous passion–even as the deadly ghosts of a past tragedy reach out to thwart a love that has yet to be spoken.

→ As an Amazon Associate I earn from qualifying purchases. I also may use affiliate links elsewhere in my site.