Monica's notes: My critique partner thought this section from the POV of the unknown spy wasn’t needed. She was right!

Time was running out.

His hopes to find something wrong with the books had been for naught—and his plan to make it look as if he were cheating had been put to an end from an unexpected source.
He needed to find something soon. God knew he couldn’t take this much longer. His nerves were frazzled to the bone. He was practically jumping at his own shadow.

He knew MacLeod was suspicious, and it wouldn’t be long before he figured out that he had a traitor in his midst.

He never should have let his uncle talk him into this—spying should be left to those with the stomach for deceit. Not that he’d had much choice. Like MacLeod, his uncle was not a man to defy.

His uncle was also right—MacLeod was involved in something he didn’t want anyone to know about. Where did he disappear to during the day? Like his wife, he didn’t believe he was merely attending to clan business. He would wager it had something to do with the mysterious army that had helped him fend off the attack.

The chief was far too cautious for him to attempt to follow him. He had to find another way.

:: Key to understanding Tor’s initial refusal to join the Highland Guard is the separate “sea kingdom” aspect of the Western Isles from the rest of Scotland at the time. Although the Hebridean (West Highland) kings had been made Scottish barons after the Battle of Largs and Treat of Perth in 1266, they likely would not have considered themselves Scots. At the time most of the chiefs held land by “Celtic-Scandinavian tenure” and weren’t brought “into a direct feudal relationship with the Crown” until the time of Bruce. (G.W.S. Barrow, Robert Bruce, Edinburgh University Press, 2005, pg. 375.) To make this point, I decided to have Tor’s “clansmen” call him “ri” (king)—along the lines of the Irish “kinglets.” The Irish, “like other Gaelic societies, recognized degrees of kingship ranging from tribal kingship up to provincial kingships.” (R. Andrew MacDonald, The Kingdom of the Isles, Tuckwell Press, 2002, pg. 59). It’s probably stretching it a bit, but as there is a lot of disagreement over the meaning of titles in the period (and how they should be translated), I felt like I had a little leeway.

:: There is some disagreement over Robert the Bruce’s whereabouts in the key period after William Wallace’s death and before the murder of John “The Red” Comyn at Greyfriars in Dumfries. Barrow believes that he was most likely in Scotland (See above, pg. 181-189). But others like Scott (Ronald McNair Scott, Robert The Bruce, Barnes and Noble, Inc., 1982, pg. 72) follow the more “romantic” series of events set forth by many Bruce Chroniclers, placing Bruce in England where he is warned by Ralph de Monthemer, the Earl of Gloucester (look for him in The Hawk) the night before Edward is to have him arrested for treason.

:: One of the earliest and best known Chroniclers of Bruce is John Barbour (c. 1320-1395), whose epic poem, The Brus, is the source for much of the lore and mythology surrounding the warrior king. Unlike most medieval historical chronicles it was written in Scots—not Latin—and is the oldest major literary work that has survived in that language.

:: Choosing the spelling to use for names is always tricky. Many of the characters are referred to by different names (with inconsistent spellings) in the sources. Robert Bruce for example can be referred to as Robert the Bruce, Robert Brus, Robert de Bruce, Robert de Brus, Robert le Brus, the Bruce—and this is aside from the issue of title (which unlike later periods doesn’t seem to have been as rigidly applied). For the Gaels, it is even trickier. As with my previous books, I decided to use the modern English names to make it more accessible for the reader and easier to keep different characters with the same names straight. As I’ve mentioned before, the Scots loved to repeat the same name down through the generations.


:: William “Templar” Gordon is my homage to the persistent linking of Scotland with the legends of the Knights Templar. Bruce’s excommunication by the Pope for the murder of the Red Comyn at Greyfriars made Scotland, which was under interdict, a natural place for the Templars to take refuge. It’s a popular theory, but one that has not been proved and is debated by scholars.

:: Thought to have originated in China, Gordon’s gunpowder—brought back from his Grandfather’s crusade to the holy land—would have been known as “black powder.” How gunpowder made its way to Europe is not known, but some believe it was brought back from the crusades. Roger Bacon wrote one of the earliest European recipes for it in the mid-thirteenth century.

:: Finlaggan Castle on the Isle of Islay, the ancient stronghold of the MacDonalds and the place where Tor and Christina first meet, is one of the most amazing and haunting places I have ever visited. 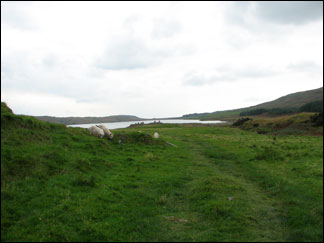 Beautiful and remote, there was an indescribable feeling of importance to the place. Walking along the causeways, through the whistling reeds to the ruins, was both eerie and a journey back in time. Although pictures don’t quite capture the magic, you can see some on my Flickr page and read more about the castle here.

Read an Excerpt from this book »