Removed from The Hawk

Monica's notes: I originally intended for Randolph to play a bigger part in the novel, but as I was writing I realized there was enough going on without him! Here he starts to question Ellie’s identity, but I decided it was too much at this point—I didn’t want to put Erik on too much notice.

“Just a feeling. Something in her manner. I think she’s hiding something.”

Hearing his own suspicions thrown back at him didn’t sit well with him.


“In the Western Isles and Ireland the two are not necessarily exclusive.”

The young knight threw him an angry scowl. “That’s not what I meant. There are little things. The way she sits. The proud tilt of her chin. And there’s no deference in her manner.”

“You should have met my nursemaid.”

“Did your nursemaid have her own falcon?”

Erik shot him a hard glare, then conceded, “No.”

:: As I mentioned in the Author’s Note for The Hawk, I had a hard time wrapping my head around the proximity of the Kintyre coast of Scotland to the Antrim coast of Ireland. Under the “picture is worth a thousand words” category, this shows just how close thirteen miles is. 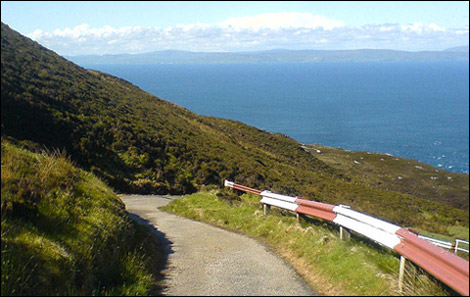 Antrim Coast from Mull of Kintyre on a sunny day, taken at an angle. Scotland (Foreground), Straits of Moyle (Mid-Ground), Northern Ireland's Antrim Coast (in distance). (Thanks to Thefreelancetrader for the picture.)

:: In the west, the shifting power and struggle for dominance among the branches of MacSorleys is one of the key events to the political landscape at the time. Part of the “problem” stems from what happened after Somerled’s death. When he died Somerled’s kingdom was divvied up between his three sons—Dugald, Ranald, and Angus (died without issue)—according to the Gaelic/kin-based practice, rather than given to the eldest son as it would have been according to feudalism’s primogeniture. To this day, there is still a debate about which son—Dugald (MacDougalls) or Ranald (MacDonalds and MacRuairis)—was the eldest. However, as one historian points out (see resources The Kingdom of the Isles, p. 71), the question is immaterial and even anachronistic. To kin-based societies which son was the eldest didn’t matter.

Divvying up lands might be the more egalitarian thing to do, but it also created power struggles with different branches of the family who claimed to be “king” in the Isles. By the mid-13th Century, Somerled’s great-grandsons Ewen “MacDougall,” who was aligned with the Scottish in the fight over the Isles culminating in the Battle of Largs and Treaty of Perth (ceding the Western Isles to Scotland), and Dugald “MacRuairi,” who was aligned with the Norse, both used the title. At the time of Bruce’s rebellion, the MacDougall Lord’s of Argyll as Edward’s authority in the west were probably the most powerful clan. Not surprisingly, with the MacDougalls aligned with Edward, the MacDonalds decided to align themselves with Bruce. A generation later, this fortunate choice resulted in MacDonald “Lord of the Isles” dominance, which would last for centuries.

:: The story of the errant lighting of the fire at Turnberry Castle, which was supposed to be a signal to Bruce to attack, comes from Barbour, the great Bruce chronicler of the 14th Century (see also The Chief “More On”). Supposedly, Bruce sent a spy to Turnberry ahead of the army to decide whether the conditions for an attack were favorable. If so, the spy was to light a fire on the point, signaling to Bruce and his men to attack. Apparently, the spy decided conditions were not favorable, but Bruce and his men attacked anyway when someone else happened to light a fire on the pre-arranged point. Bruce and his men made the most of what could have been a disaster at a very precarious time by attacking the village.

:: The royal castle of Ayr, built by William the Lion at the end of the 12th Century, was razed by Robert the Bruce in 1298, but was rebuilt enough for the English to garrison it again a few years later. Ironically, Robert Bruce was made keeper of the castle by Edward in 1302. Although there is a dearth of information on the former royal castle (and no evidence of it remains), it was still in the hands of the English around the time of The Hawk. Barrow (see my resources) has it in English hands as late as December 1309 (p. 135).

:: Sir Walter Scott is thought to be responsible for the famous story of Bruce and the spider. Here is the section from Scott’s “Tales of a Grandfather.”

“While he was divided betwixt these reflections, and doubtful of what he should do, Bruce was looking upward to the roof of the cabin in which he lay; and his eye was attracted by a spider, which, hanging at the end of a long thread of its own spinning, was endeavouring, as is the fashion of that creature, to swing itself from one beam in the roof to another, for the purpose of fixing the line on which it meant to stretch its web. The insect made the attempt again and again without success; and at length Bruce counted that it had tried to carry its point six times, and been as often unable to do so. It came into his head that he had himself fought just six battles against the English and their allies, and that the poor persevering spider was exactly in the same situation with himself, having made as many trials, and been as often disappointed in what it aimed at. " Now," thought Bruce, " as I have no means of knowing what is best to be done, I will be guided by the luck which shall attend this spider. If the insect shall make smother effort to fix its thread, and shall be successful, I will venture a seventh time to try my fortune in Scotland; but if the spider shall fail I will go to the wars in Palestine, and never return to my native country more."

“While Bruce was forming this resolution, the spider made another exertion with all the force it could muster, and fairly succeeded in fastening its thread to the beam which it had so often in vain attempted to reach. Bruce, seeing the success of the spider, resolved to try his own fortune; and as he had never before gained a victory, so he never afterwards sustained any considerable or decisive check or defeat. I have often met with people of the name of Bruce, so completely persuaded of the truth of this story, that they would not on any account kill a spider; because it was that insect which had shown the example of perseverance, and given a signal of good luck to their great namesake.”

:: Exactly who held Dunaverty Castle in 1306 when Bruce took refuge before disappearing into the Western Isles is unclear. Conventional wisdom—again thanks to Barbour’s The Brus—had it belonging to Angus Og MacDongald (as I suggested), but Barrow thinks Bruce held the castle himself, having received it from a “Malcolm MacCulian,” to whom Edward had (improperly) granted the castle (see resources, Robert Bruce, pg. 192-3). The castle was said to have been in Stewart hands in the late 13th Century before passing to the MacDonalds.

:: When you think of the Western Isles you probably think of the Isle of Skye, Arran, Mull, Staffa, Lewis, Isla and possibly the Orkney’s and the Shetlands. If you are a little more familiar with the area, you might think of Barra, Uist, Eigg, and a few others. I had no idea until I visited, however, just how many islands there are. Getting lost in the Western Isles as Bruce presumably did in 1306-7 and Erik does with Ellie would have been easier than it sounds. According to Hamish Haswell-Smith (see resources, preface), there are a hundred and sixty two islands of approximately a hundred acres or larger, and hundreds of smaller isles/islets. Like Ellie, I hope to visit as many of them as I can. I’ve got a long way to go. So far I think I’m at about a dozen.

:: The seafaring abilities of the Norse are axiomatic, but did you know that the nautical term “starboard” comes from old Norse?

:: mea culpa: A reader alerted me to the fact that there are no hummingbirds in Scotland and that my “heart fluttering like the wings of a hummingbird” references are therefore anachronistic. Unfortunately, it was too late to make a change in The Hawk.