:: In Highlander Unchained, Flora uses smelly Fulmar oil from her brother Rory’s Isle of St. Kilda to oil Lachlan’s swords. St. Kilda is a UNESCO World Heritage site (for both natural and cultural resources) and an absolutely fascinating place to visit. Considered the “Holy Grail” of Island explorers, I was lucky enough to travel to St. Kilda in the fall of 2006. Truly an island on the edge of the earth, for nearly 2,000 years it was something of a lost world. But in the 19th Century it was “discovered” by missionaries and tourists which would eventually lead to the demise of its unique society. Sadly, in 1930 the last native St. Kildans were evacuated. 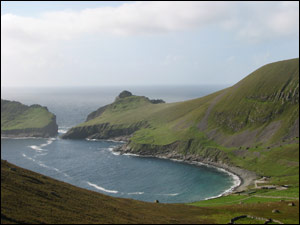 :: There is a great story of how St. Kilda was acquired by Clan MacLeod. Apparently there were two claimants for the isle: The MacDonalds of Uist and the MacLeods of Dunvegan. The two clans agreed that possession would be settled by a birlinn race. The first to touch land on Hirta (one of the archipelago of St. Kilda) would win. The race was close, but as they neared Hirta the MacDonalds appeared to have the advantage. A creative MacLeod clansman raced to the front of the birlinn, chopped of his hand, and tossed it over the boat of MacDonalds to land on the rocky shore—thus securing the island for his clan.