Monica's notes: I wanted to give a little more background about the MacLeods of Lewis when Neil was first introduced, but my editor and I eventually decided that it might get too confusing.

The previous Chief, Tormod MacLeod, had traveled to London to plead with the King about Lewis only to be held in the Tolbooth without trial for nearly two years, leaving his half-brother Neil as the presumptive heir. Tormod MacLeod was imprisoned by King James for 10 years without trial then removed himself to Holland.

Monica's notes: I still like this summary of the issues facing the Highlanders, but it was somewhat repetitive.

Jamie, Elizabeth and Meg had discussed the problems facing the Highlanders many times. Pragmatically, they realized that the Island Chiefs would face many changes over the next few years from the new powerful King of England—and the Chiefs must either adapt with the changes as best they could or watch their power slip away into the ubiquitous mist.

:: As mentioned in the author's note, the character of Dougal MacDonald is loosely based on Donald MacIain 'ic Sheumais (also called "Do'ull Mac Iain 'ic Sheamuis) a bitter foe of the MacLeod's and a kinsman of the MacDonald of Sleat. Around 1601, Donald led an attack against the MacLeods near Carinish Church (North Uist) that resulted in great loss of life to the MacLeods. The battle is known as Blar na Feithe — the battle of the ditch. Not long afterward, while Rory MacLeod was staying at his house at Rodil on Harris, a great storm arose. Looking out across the minch, Rory was said to have made a remark that tonight he would not deny shelter to even his worst enemy. It would prove prophetic when Donald was forced by the storm to take refuge near Rodil that very night. Rory offered him shelter and Donald and his men accepted the "hospitality" of the MacLeods. But the hostilities between the two threatened to break out at supper when it was pointed out that the two sides had met at Carinish only a few weeks before. Donald and his followers refused the offer to sleep in the house, instead taking refuge in the kiln (barn). In the middle of the night, unbeknownst to Rory Mor, in an egregious breach of Highland Hospitality, the MacLeods set fire to the kiln. But the storm had abated, and Donald and his men had already left. It was said they watched the fires burn from their birlinn. Not long afterward, Donald would meet Alex at Coire na Creiche.

:: As mentioned in the author's note, three attempts were made to colonize Lewis by the Fife Adventurers. In June 1598 Lewis was leased to the Fife Adventurers the first time. The original twelve gentlemen included the King's cousin, the Duke of Lennox. Notably, the Adventurers are specifically given authority to slaughter, mutilate, or do what is necessary to "root out the barbarian inhabitants" on the isle. Some historians have characterized King James's actions as tantamount to what would be termed an attempted genocide today. The Adventurers lasted on Lewis this first time from October 1598 to December 1601. In 1605, a new commission was formed, led by Sir James Spens and Sir George Hay—this is the attempt that is the focus of Highlander Unmasked. The second occupation of Lewis lasted from August 1605 to October 1606—longer than I averred in Unmasked. The final attempt occurred briefly in 1609. The King would have more success with colonization in Ireland, to disastrous effect in Ulster.

:: Arthur's Seat: Arthur's Seat, the dramatic hill which Alex and Meg pass on their ride through Holyrood Park, is thought to be one of the places where Beltane fires were lit on the first of May at sunrise to "hail the coming summer and to encourage by mimetic magic the renewal of the food supply." Even through modern times young girls would go to perform the rite of bathing their faces in the May dew—assuring health, happiness and beauty for the coming year. See "The Silver Bough Volume Four" by F. Marian McNeill (1968) 78-79. Geologically, Arthur's Seat is thought to be vents from one of the best preserved of the ancient volcanoes on which Edinburgh is built. 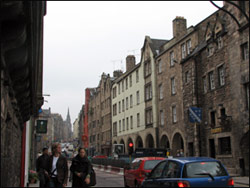 :: The stench of the streets of Edinburgh which Alex experiences in Chapter Five as he walks down "Vai Regius" is probably understated. Edinburgh was well known for its smell. Short of space, builders decided to build up. Tenement houses along Vai Regius were many stories high, with people stacked one on top of the other (see pictures below). The classes often mingled in the same house with the wealthiest living on the upper floors.

A description of 18th Century Canongate says it all: 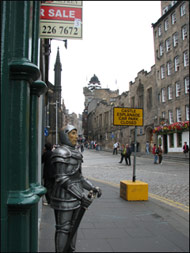 "Holding noses was the thing to do, or priming with snuff to shun the smells. But the constant threat of soiled clothes and shoes, not to mention the diseases which spread like wildfire, must, at times, have been beyond bearing. In this city of 70,000 odd souls, sewers run openly. Dogs, cats and pigs scavenge for food among the refuse. Wooden luggies (pails) outside doors on stairheads are filled daily with every kind of household waste; stinking debris, chucked out the window at night, lies in the streets till scavengers turn up in the early morning to take it away. English travelers visiting the city write home with some revolting details of the streets of Edinburgh and complain that they can't sleep at night for the smell which Boswell describes in his diary as Edinburgh's 'evening effluvia' and others nickname the 'flowers of Edinburgh.'"

Indeed, one of Edinburgh's nicknames is "Auld Reekie," literally old smoky, from the coal and wood that were burned as fuel.