Removed from Chapter One

Monica’s notes: My editor and I were trying to condense the first chapter of the book, so this scene had to go. I still like it though for the interplay between Isabel and Bessie.

Bessie must have been watching her much closer than she realized. She turned to her cherished nursemaid and grinned a tad mischievously. “I was just remembering the day I learned how to swim.”

As Isabel knew she would, Bessie immediately bristled. Her finger moved rapidly back and forth only inches in front of Isabel’s nose. If they had not been sitting on the crowded birlinn, Isabel knew Bessie would be stomping her foot with indignation as well.

“Isabel MacDonald, that is not the least bit funny. Why you scared me full to death that day. Imagine jumping from the highest rocks above Loch Carron at barely six years old without knowing how to swim. And just because young Ian dared you to! Stubborn and willful you were. You never could back down from a challenge issued by those foolish older brothers of yours. You’d think at least one of them would have shown more sense.”

Valiantly, but without success, Isabel tried to smother a chuckle behind her frozen fingers.

Bessie was too busy ranting to take any notice. “And you, young miss, were no better than those hellions. Daring Ian to do the same the moment you could speak after being fished out of the loch by Angus. The two of you looked like drowned kittens when Angus and Alisdair finally dragged your listless bodies home. Scared me something dreadful, the sight of the two of you. My poor heart has been weak ever since.” Bessie patted her chest for emphasis.

Isabel grinned broadly at the last. Bessie did not have a weak bone in her body. And her heart beat stronger than ever. She seemed barely half of her two and forty years. But Isabel acknowledged that her sometimes reckless childhood behavior might have contributed more than a few of the gray hairs to that still lovely head.

“Ah, but who was it that encouraged me?” Isabel teased. “Wasn’t it you, Bessie, who told me that if I wanted something bad enough, I would find a way to get it? That if I wanted, I could run, ride, and hunt as well as my brothers?”

Bessie gave her a sharp stare. “Well, at the time I was merely trying to comfort a heartbroken five year old whose older brothers had refused to allow her to accompany them on their hunt. I didn’t know you would take those words quite so literally. And I certainly didn’t expect you to take up a sword. Nor did I expect you to become such an accomplished bowsman. Although ‘tis hardly surprising given the endless hours you devoted to your task. Perhaps your stitchery would have benefited from such devotion.” Bessie moved her hands to her waist, so that her arms resembled the wings of a clucking chicken. “'Tis not fitting for a young girl to better her brothers. If your father knew, he’d have my hide.”

Monica’s notes: There is a waterfall at Dunvegan known as "Rory Mor's Nurse" because it was said that from his tower window the chief liked to listen to the burn outside as it lulled him to sleep. I wanted to get this in somehow, but it didn't really work here. 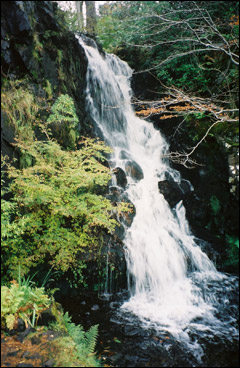 There was something inherently soothing about the sight and sound of water. At night, the trickle of a nearby waterfall lulled him to sleep like the gentle swaying arms of his long departed nursemaid. But his favorite time was the morning, standing at this window as he did now, watching the wonder of the rising sunlight catch the teal ripple of the calm sea. Watching the iridescent panoply of color flicker from shades of silvery pink to peach and back again. Usually the sea gave him some modicum of peace, but it deserted him today.

Here was the quote that would have led off the chapter:
I would old Torquil were to show
His Maidens with the breasts of snow,
Or that my noble liege were nigh
To hear his Nurse sing lullaby.
(The Maids – tall cliffs with breakers white,
The Nurse – a torrent's roaring night.) 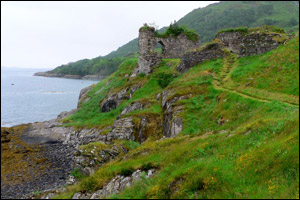 The threat posed by the Mackenzie of Kintail against Isabel's clan, the MacDonalds (or MacDonells) of Glengarry, was very real. The two clans had been feuding over Glengarry's lands in Lochalsh, Lochcarron, and Lochbroom. It was a feud that after much bloodshed Glengarry would lose. In 1602 Strome Castle was besieged by Kintail. Glengarry was forced to surrender and the castle was blown up. And in 1607 Kintail received charter to the disputed lands.

An interesting side note: Isabel's father, Donald Mac Angus, the 8th Chief, lived to be over a hundred years old.

:: Castle Dunscaith, or Dun of the Shadow, was the original seat of the MacDonald of Sleat. Local legend is that Dunscaith was built in one night. At some point in the 16th or early 17th Century the clan seat moved to Duntulm Castle (on the disputed Trotternish peninsula), but as the date of that move was unclear I decided to stick with Dunscaith. A description of Duntulm from a late 16th century reference seems to suggest Duntulm was uninhabited, but by 1616 Sleat refers to Duntulm as his principal residence. Duntulm, too, was abandoned in the early 18th century when a nurse was reported to have dropped the chief's baby son from a window (like the one pictured below) to his death on the rocks below. 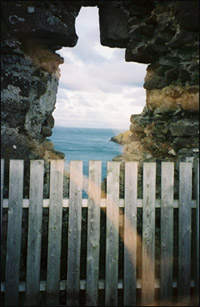 :: The dispute over Trotternish that plays prominently in Highlander Untamed would not end until 1618 when MacDonald received charter to his lands in Skye, except for Trotternish for which he was to pay rents to MacLeod.

:: The luchd-taighe guardsmen were the chief's retinue, or in colloquial terms, his posse. Their purpose was to attend the chief at all times. They were well-trained in weaponry and seafaring, as well as other warrior pursuits such swimming and dancing. It was a great honor to be chosen as one of the chief's personal guardsmen and a chief's prestige was derived from the number of these household men. Not surprisingly, King James attempted to place restrictions on their numbers. In 1616 the Privy Council forced the chiefs to sign a bond limiting the number of men to: MacLean of Duart 8, MacDonald of Sleat 6, MacLeod of Dunvegan 6, MacLean of Coll 3, Clanranald 6, Maclaine of Lochbuie 3, MacKinnon 3. This was a huge reduction from the 140 men Duart was reported to have had at the battle with Coll in 1598.